Funerals are never an easy subject to deal with, especially when you’re dealing with the death of a loved one. A couple of funeral homes in the United States of America have come up with a whole new way of dealing with deceased humans – by turning their bodies into compost. 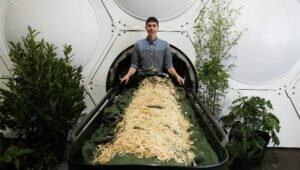 One aspect of death that is often not discussed as much as it should, be is the logistics of laying to rest the body of a deceased human. In India, cremations and burials can become expensive. However, as populated as our country might be, we don’t have to face the issue of a lack of space to cremate bodies or to bury them, at least under normal circumstances.

In most European countries and states in the United States of America, a plot of land in a cemetery can be very expensive. Then there is the problem of availability as well – many European cities have run out of space to bury their dead. That is why even in traditionally Christian communities across Europe and the US, where the customer has been to bury the deceased, families choose to have their loved ones cremated and their ashes stored in urns.

There is also the sentimentality that is often associated with death. This same sentimentality has led to businesses that turn the ashes of a recently deceased human into zirconia diamonds.

A new concept is on the rise in some regions of the United States, wherein families of a recently deceased person are sending the body to be turned into compost. The family often uses this compost in their garden or in organic farming.

As bizarre as this sounds, there is a scientific process behind this. Traditional burials in the US involve tons of steel, concrete, and toxic chemicals. Plus, cremating a body emits several hundred pounds of carbon into the atmosphere. This is where the concept of NOR or natural organic reduction is.

What happens is that a family will send the body of their loved ones to a company or a funeral home that provides this service. The body will then be layered into a composting box, along with some actual soil, mulch, and agents that would hasten the decomposing process. After about two months, the new “soil” will be shipped to the family once the body has completely decomposed. The family can then choose to either use it in their backyards or gardens or donate it to one of the several charities that promote organic farming.

During the two months it takes for the body to decompose, the family members can visit the decomposing facility and pay their respects to the deceased as and when they get ready – there is no urgency in coming to terms with the death of a loved one.