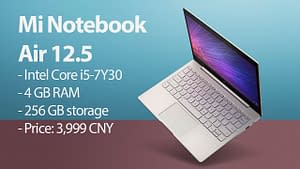 Xiaomi has just launched the Mi Notebook Air 12.5 in China. As with all Xiaomi devices, the Air 12.5 appears to offer a really good hardware package at a very reasonable price.

In terms of specs, you get a choice of three processors, only 4 GB of RAM and either a 128 GB or 256 GB SSD. Colour options include gold and silver. The processors include an Intel Core i5-7Y54, a Core m3-7Y30 and an Intel Core m3-6Y30. The first two are 7th gen CPUs and the last one is a 6th gen CPU. They are all ultra-low power models designed for light work. In terms of power, they’re in the same class as Apple’s 12-inch MacBook, making the Mi Notebook Air 12.5 less powerful than Apple’s brand-new MacBook Air.

The last model, with the 6th gen CPU, appears to be the only model with an integrated cellular modem (4G).

It’s also a little disappointing that the RAM is limited to 4 GB. As anyone who’s used a Windows laptop for any amount of time will tell you, 4 GB will just barely handle Windows 10 and a couple of tabs on Google Chrome. On the other hand, we’re extremely happy that Xiaomi went with an SSD instead of a hard disk. If nothing else, the SSD will make up for some of the shortcomings introduced by the RAM.

Lastly, we have that display. As the name suggests, the Air 12.5 features a 12.5-inch display. The resolution is 1920×1080 (FHD) and Xiaomi claims a brightness and contrast ratio of 300 nits and 600:1 respectively. The brightness is much higher than that of the average laptop in this price range (even higher than that of the MacBook Air), and the contrast ratio is also very good.

Xiaomi claims that the battery can be charged to 50 percent in just 30 min and that the total battery life is about 8 hrs.

In terms of I/O, we have a USB-A port, a USB-C port, HDMI and a 3.5 mm headphone jack. The USB-C port is rated for USB 3.0 speeds and is not Thunderbolt compliant.

Xiaomi’s choice of hardware means the performance should be somewhere between Apple’s 12-inch MacBook and 2018 MacBook Air. We do wish there was more RAM, though.

Other features include a backlit keyboard, a glass trackpad and support for faster 5 GHz Wi-Fi. Windows 10 Home is the OS of choice.

Lastly, the laptop is just 12.9 mm thick and weighs a mere 1.07 kg, making it extremely portable.

The laptop is, sadly, only available in China at the moment — at a price of 3,599 Yuan (around Rs 36,000). There’s no word yet on an India launch, though Xiaomi’s Manu Kumar Jain did hint at the possibility of an India launch in 2019 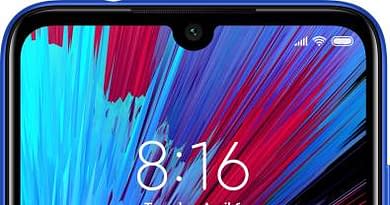 Apple leads global wearable market with a growth of 13.5%