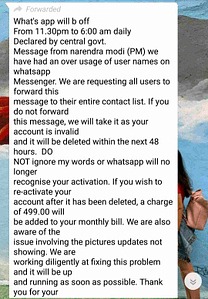 There was a social media outage on 3 July and this involved WhatsApp, Facebook, and Instagram. The technical issue was resolved after a few hours but users from all around the globe were affected by this outage. During this glitch, users came across a lot of things, for one, Facebook outage revealed how their AI tags images on Facebook and Instagram, two, hoaxer came at play on WhatsApp creating a panic with fake messages.

During the outage, many users in India received fake messages saying WhatsApp is down because of “over usage of users names on WhatsApp” and it will be down from 11.30 pm to 6.00 am daily and asked users to forward the message to their contact list. The message also read that if ignored, the user’s accounts will be deleted within 48 hours. It further said that for re-activation after 48 hours users will have to pay Rs 499, which will be deducted from their bill. The sender of these texts claimed that it was a message from Prime Minister Narendra Modi.

This is what the text message read:

(sic)”What’s app will b off From 11.30pm to 6:00 am daily Declared by central govt. Message from Narendra Modi (PM) we have had an over usage of user names on WhatsApp Messenger. We are requesting all users to forward this message to their entire contact list. If you do not forward this message, we will take it as your account is invalid and it will be deleted within the next 48 hours. DO NOT ignore my words or whatsapp will no longer recognise your activation. If you wish to re-activate your account after it has been deleted, a charge of 499.00 will be added to your monthly bill. We are also aware of the issue involving the pictures updates not showing. We are working diligently at fixing this problem and it will be up and running as soon as possible. Thank you for your cooperation from the modi team. WhatsApp is going to cost you money soon. The only way that it will stay free is if you are a frequent user i.e. you have at least 50 people you are chatting with. To become a frequent user send this message to 10 people who receive it (2 ticks) and your WhatsApp logo will change color. send this to 8 people to activate the new whatsapp..
Saturday morning whatsapp will become chargeable. If you have at least 10 contacts send them this message. In this way, we will see that you are an avid user and your logo will become blue and will remain free. (As discussed in the paper today. Whatsapp will cost 0.01€ per message. Send this message to 10 people. When you do the light will turn blue otherwise whatsapp will activate billing. ITS TRUE …… U get blue TICKS”

As per The Indian Express, there was another fake message being forwarded to users, which claimed that it came from Google. It said that due to some problems in the satellite, “WhatsApp is banned for a week” and people won’t be able to download any images, videos and audio records.

Do note, these messages were fake.

We have reached out to WhatsApp, but we haven’t received any response from them yet. We will update the space as soon as we hear from them.

This is not the first time that a fake message was being forwarded to people feeding them with wrong information. The consequences of these fake messages have also lead to major incidents including mob lynching and killings. Last year, it was reported that WhatsApp was responsible for 30 killings.

These are purportedly through public lynchings on the basis of a single rumour of, “child kidnapping”. Such assertions are posited as incontrovertible facts that have framed a debate around the growing use of technology by the ignorant masses and the responsibilities of a technological platform. 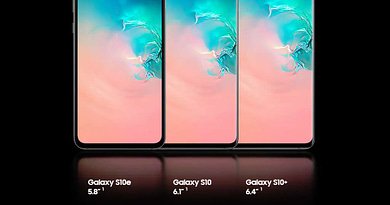 XIAOMI ROLLS OUT ANDROID OREO 8.1 BASED MIUI 10 UPDATE TO REDMI 5A USERS