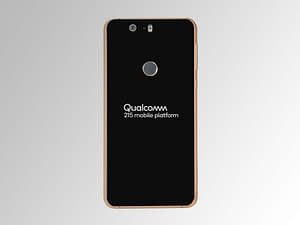 Qualcomm has taken the wraps off its latest addition to the Snapdragon 200 series — the new Qualcomm Snapdragon 215.

Aimed at offering more firepower on low-end smartphones, the 215 acts as the successor to the Snapdragon 212. According to Qualcomm, the chip introduces new tech that previously hasn’t been available in the 200 series, including the fact that it’s the first 64-bit processor in the series.

When it comes to raw processing power, the Snapdragon 212 is supposed to be 50 percent faster than the previous-generation Snapdragon 212, meaning that budget handsets may be able to handle a lot more processing at a time.

The new chip brings more advanced features to the table as well, like support for dual camera systems and Full HD video recording.

Qualcomm is quick to point out other “firsts” for the Snapdragon 215. For example, the chip is the first to support dual SIM cards with dual VoLTE, and also the first to support NFC payments on Android, which theoretically means that you can use a 200-series chip for POS transactions.

The Snapdragon 215 also supports 64-bit versions of Android, including Android Go, which is a watered-down version of Android that runs lightweight apps like Google Maps Go and YouTube Go.

The chip also features the Snapdragon X5 modem, which allows for LTE download speeds of up to an impressive 150 Mbps.

Overall, the upgrade seems like a natural progression for the 200 series. Phones that had the Snapdragon 212 include the likes of the Nokia 2, but we haven’t seen a lot of OEMs adopt the chip for their entry-level phone and Qualcomm would definitely want to change that.