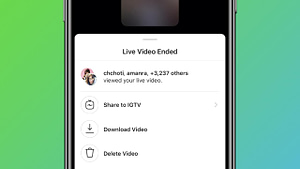 In 2017, Facebook first rolled out the closed captions feature for its live videos. Now, Instagram is launching a similar feature for IGTV.

Instagram VP of product, Vishal Shah has announced that starting today (16 September), Automatic captions will be rolling out to IGTV. The automatic captions can be enabled in Settings by turning on video captions.

Shah believes that as more and more users will use the Automatic Captions feature on IGTV, the artificial intelligence used behind the feature will improve eventually.

As of now, the Automatic Captions will be available in 16 languages. Instagram plans to include more languages into the feature, eventually.

The rollout of Automatic Captions on IGTV is part of a larger push by Facebook to improve accessibility options on its platforms.

“While there is no shortage of information, not everyone can access it. It needs to be available to hundreds of millions of people in the world who are deaf or hard of hearing. According to the World Health Organization, over 5% of the world’s population – or 466 million people – have disabling hearing loss, and that is projected to increase to over 900 million by 2050,” reads a blog by Facebook.