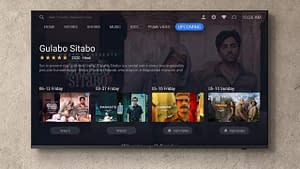 The government on Thursday imposed restrictions on imports of color television, a move aimed at promoting domestic manufacturing and cut inbound shipments of non-essential items from countries like China.

“Import policy of color television…..is amended from free to restricted,” Directorate General of Foreign Trade (DGFT) said in a notification.

Putting an item under a restricted category of imports means the importer of that commodity will have to seek a license from the commerce ministry’s DGFT for the imports.

India imported color TV worth USD 781 million in 2019-20. Imports from Vietnam and China stood at USD 428 million and USD 293 million respectively in the last financial year.

“It will have a positive impact on domestic assembling, which happens here. Leading brands already have manufacturing and assembling units in the country. So, it is not going to impact us,” he said.

The move will have a procedural impact, he added.