GoPro announced three new action cameras under its all-new Hero 11 Black series, the  Hero 11 Black, Hero 11 Black Creator Edition, and the Hero 11 Black Mini. Each of the three new HERO 11 Black cameras are designed to appeal to consumers in different ways, meeting the needs of their particular use cases. 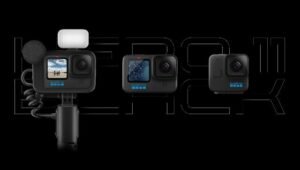 All three cameras under the Hero11 Black series get a new and much larger sensor that delivers the highest resolution, the highest 10-bit color depth, the highest level of video stabilization, and the most expansive field of view. All three new cameras are powered by GoPro’s GP2 chip and include a brand-new feature that automatically sends highlight videos to your smartphone.

The new GoPro Hero 11 Black may look similar to last year’s Hero10 Black, meaning it still comes with a 1.4-inch front and a 2.27-inch touchscreen display on the back.

However, it has an all-new 1/1.9-inch upgraded sensor capable of shooting 27MP stills natively and 24.7MP stills from videos. While the camera retains the same 5.3K video shooting capabilities at 60fps or 4K at 120fps, the new sensor captures 10-bit color video and enables 8:7 aspect videos. 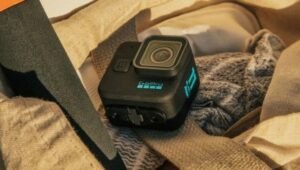 Finally, we have the most expensive camera in the lineup, the GoPro Hero 11 Black Creator Edition. It is a supercharged version of the Hero 11 Black. It has a long-lasting battery grip with built-in buttons for one-handed camera control, an optional directional microphone, external mic input, an HDMI port for connecting to external displays, a high-output LED light, and two cold shoe mounts for mounting additional accessories.