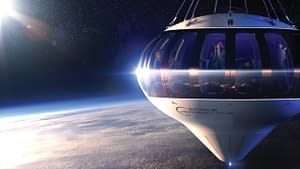 Space Perspective, a Cape Canaveral, Florida-based startup, has announced that it plans to send human passengers to the edge of outer space using balloons.

According to a report on CNN, the company will be using a high-tech version of a hot air balloon, with a pilot and up to eight travelers riding in a pressurized capsule that is suspended from an enormous blimp. Space Perspective has scheduled the test flight of its Spaceship Neptune for early 2021. The takeoff will happen from the Shuttle Landing Facility at NASA’s Kennedy Space Center in Florida.

While the test flight will be uncrewed, Space Perspective hopes that in a few years, it’ll also be taking space tourists on six-hour sightseeing tours complete with a refreshment bar and social media capabilities.

A report in Evening Standard says that each passenger will have to pay an estimated $125,000 for the journey.

According to Mark Lester, CEO of Alaska Aerospace, the high altitude rides will be available from Kodiak and will support Alaska tourism.

Lester said, “You will have people from around the world who want to come to Alaska and see the northern lights from the edge of space.”

The report reveals that passengers will begin the two-hour ascent from 19 miles above Earth.

According to a statement from Alaska Aerospace, following the tour, Neptune will make a two-hour descent under the balloon and splashdown, where a ship will retrieve the passengers.

A New Atlas report mentions that the FAA Office of Commercial Spaceflight will regulate the launches. Apart from passengers, the flights could also include research-related payloads.

“Few endeavors are more meaningful than enabling people to experience the inspiring perspective of our home planet in space for the betterment of all, and that’s what we are accomplishing,” said company founder Taber MacCallum.